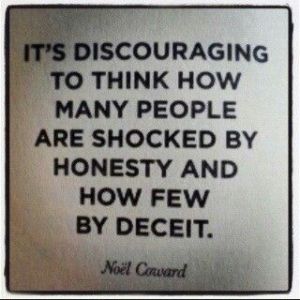 The ideals which have always shown before me and filled me with the joy of living are goodness beauty and truth. To make a goal of comfort or happiness had never appealed to me; a system of ethics built on this basis would be sufficient only for a herd of cattle.” – Albert Einstein

Some people routinely behave in ways that are out of integrity, unethical, immoral and untrustworthy and yet never experience guilt. How so?

A growing body of evidence indicates such folks “disengage” from their core values, from their moral compass and even consciously “forget” information that would otherwise limit their inappropriate behavior. They rationalize their dishonest behavior in a way that lets them off the “honesty” hook.

These dishonest folks – white-collar and blue-collar – live and work in virtually every system and organization – finance, politics, healthcare, education – even live in our homes. Our society has become inundated by the “dishonest” and “untrustworthy.”

When behaving dishonestly and unethically, one experiences both mental and physical reactions. Mentally, one experiences “cognitive dissonance” – a knowing that there is a “disconnect” between one’s act and one’s value system, and a “felt-sense” somatically – in the body – that is experienced as some flavor of physical discomfort.

So, how do folks respond to their dissonance and discomfort? How do they come to grips with their distress?

There are those who “do the right thing” and move into alignment with their core values and moral code. And there are those who go through a “rationalization and judgmental” process, i.e., “moral disengagement,” in order to clear their conscience, to view their action as “morally permissible.”

Too, there are those who disengage morally in order to benefit from another’s dishonest or unethical behavior (e.g., buying clothes from a company that ignores human rights and uses child labor).

How do I morally disengage?

The number of “hypocrites” who have surfaced or been “outed” in recent days, weeks, months and years, in the arenas of politics, sports, finance, religion, health care, business and the like are prime examples of the duplicity that moral disengagement perpetuates.

The hypocrisy is couched in the belief that “I engage in more ethical behavior than others.” Or, “I am less unfair than others.” Or “I have a right to be more suspicious of others’ actions than they do of mine.” Or, “others are more greedy and driven by money than I am.” Or, “I am more honest and trustworthy than others.”

The ego-need underlying moral disengagement is absolution of guilt, blame or shame for one’s dishonesty, for the disconnect between one’s values and actions. When one acts dishonestly, their tendency to morally disengage is higher than when they consider another’s unethical behavior – “I’m ethical and you’re not.”

Most of us can self-censure – consciously view our actions, and self-regulate, i.e., act morally or not. Everyone has the choice to engage in good behavior or bad behavior and judge their own actions, accordingly.

The ethical and moral bottom line is whether one chooses to activate their self-regulatory process – to consciously consider their values, standards, moral code and conduct in the moment. There are those who choose to not engage their self-regulatory process and morally disengage. That choice to morally disengage depends on the strength of one’s core values and motivations.

Life at work, at home, at play and in relationship

“It is not always the same thing to be a good man and a good citizen.” – Aristotle

A major factor affecting the degree to which one morally disengages, and rationalizes dishonesty, is their environment and culture – work, home, play and relationship.

Where you live, work, play and relate, what is the culture around dishonesty, cheating, lying, or behaving unethically? What are the tacit, subtle, silent or unwritten rules that reflect immorality, illegality, dishonesty and unethical behavior? Is moral disengagement a “business-as-usual” strategy? Is there a growing sense of pervasive dishonesty?

Do you have an obsessive need to “fit in” or “stand out,” to be regarded as “somebody” that forces you to succumb to an unethically permissive environment? What opportunities, pressures or “silent consent” might drive you to lie, cheat and steal?

The antidote for moral disengagement

Life is choices. Folks choose to be ethical or unethical, trustworthy or untrustworthy. Here are some suggestions that can support you and others to live from a place of honesty, and ethical and trustworthy behavior:

Conduct formal, on-going conversations about ethics and moral behavior. These discussions can help to put a stop to some folks’ moral disengagement.

Ask individuals to read, discuss and sign a “moral code of behavior” or honor code. These actions can help raise people’s awareness which can stem the tide of unethical behavior.

Foster open and public agreement to live the espoused values of the organization, family, or team and have open conversations with others when they behave badly

Review processes and procedures that invite dishonesty and institute ways to prevent inappropriate behavior from occurring.

Publicize behaviors and practices that have detrimental effects on individuals.

Increase the transparency of discussions around organizational policies and practices. Greater discourse can lead to less moral disengagement.

Self-responsibility – it’s all about “me”

In the final analysis, you are responsible for your actions. “The devil made me do it” and “Everybody does it” excuses don’t apply – ever.

You alone are responsible for the alignment and congruence – or lack of each – between action, goal and motivation, for moral engagement. Whether you choose to adhere to your internal moral rules or not, is your choice.

The sad corollary of moral disengagement is that, like a progressive drug, the need to morally disengage can spiral down into a hellish vortex leading to a life of obsessive lying, cheating, stealing and dishonesty.

“The needs of society determine its ethics.” Maya Aneglou

Living for the moment, driven by greed, caught up in competition and living in an environment that says, “It’s OK to be a criminal,” moral disengagement has become the “behavior-du-jour.” When we uncouple our behavior from our internal moral compass, with an “ends justifies the means” or “everybody does it” mindset, we are putting our individual futures at risk. The Universal Law of Attraction – The Universal Law of the Circle – says what we give out we get back.

Is “moral disengagement” the underlying life principle of the legacy you want to leave?

Some questions for self-reflection:

I’m grateful for the opportunity to share this reading with you and I hope you find it insightful and useful. Perhaps you’ll share this with others, post it on a bulletin board, and use it to generate rich and rewarding discussion.

What is the one thing that is keeping you from feeling successful, happy, confident, in control or at peace as you live your life – at work, at home, at play or in relationship? Maybe you know what that “thing” is…maybe you don’t. You just have a feeling that something has to change, whether or not you embrace that change. And how would that change support you to show up as a “better you?”

I’m available to guide you to create relationships that reflect honesty, integrity, authenticity, trust, and respect whether at work or outside of work. I support you to focus on the interpersonal skills that enable you to relate to others with a high level of personal and professional satisfaction – unhampered by personal inconsistencies, beliefs, “stories,” and behaviors that create barriers to a harmonious, pleasant, conscious, compatible, healthy and productive relationship.